A plump pumpkin greeted us at The Hedge Shed.

Originally grown by Mama Rati in Van Reenen for many, many seasons. She passed the seeds on to keen gardener Eidin Griffin of The Hedge Shed, who has grown them successfully in the Midlands.

An enthusiastic group had come to learn more about taking control of their own food security by saving seeds. Penny was keen on a little inspiration and a ‘kick in the butt’ to get her going; Lindiwe was hoping to understand how to reserve seed so she wouldn’t have to buy any in future; Jennifer wanted to add to the incredible knowledge her Malawian gardener had shared with her about saving seeds, so that her guesthouse would get better and better at sustainability and providing great food.

Eidin began by reading a tale called Bean, Straw and Firey Coal which explained exactly why beans have a little patch in the middle of their tummy.  Now we know.

We marvelled at the magic contained in a little seed. While most seeds are best planted within a couple of years of harvest, some do last for ages. In 1973, a 2000 year old pot was unearthed in the Middle East containing date palm seeds.  Some were planted and they are actually growing. In Mexico, a clay vessel containing ancient varieties of squash seeds was also discovered recently. Obviously, good storage methods is key to seed survival. 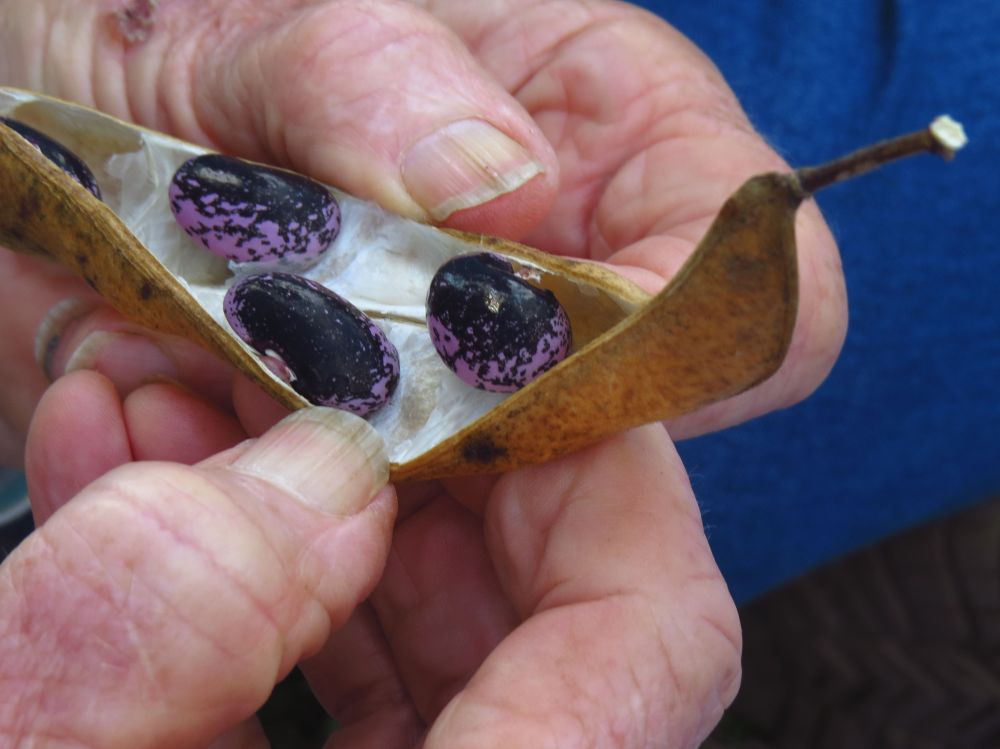 We soon realised that by saving seed, our actions are political.  Monsanto now own a quarter of the world’s seed supplies. That is a huge chunk of the world’s food.  We could be at the mercy of giant corporations if we don’t take control of this.   Most often commercial packets of seeds don’t say that you should save the seeds – because you can’t.  However, it is often worth trying – unless the seeds are numbered hybrids, eg Bold Beetroot B1337.  Then the seeds won’t be viable.

Open Pollinated seeds, bursting with happiness and fertility, are the ones to go for. They pollinate themselves (without help from humans) using wind, bees and butterflies – the natural way. Another term we often hear when buying seed, is Heirloom. These are varieties that have been grown for hundreds of years in the same area – often by the same family of farmers – so have adapted to those conditions to produce well – like Mama Rati’s Orange Pumpkin. Often seeds from other areas do not have a magnificent harvest in their first year, but once acclimatised, produce better and better in successive seasons.

Seed companies are smart and put effort into those varieties of vegetables that look the best and have the longest shelf life.

However, we all declared we want to save the ones that taste the best! Chef Erica, who is passionate about closed systems, already saves a lot of seeds as she believes good food starts with good seeds. “As a chef you don’t have to do that much with good produce – it tastes amazing just prepared simply.” We discussed GMO’s and all expressed horror at the fact that South Africa is the only country in the world where the staple food (maize) is genetically modified. It is hard to find uncontaminated maize anymore, but a number of us had been trying to grow original varieties and shared the seeds with everyone else.  It is always best to mix seed harvests from different gardens to ensure a stronger gene pool.  We shared our beautiful, home grown original maize varieties including this tiny red one.

For novices, beans are the best place to start. They seldom cross pollinate, are easy to grow and beautiful to look at. Harvest the pods on a hot dry day when they are crispy to the touch. Watch out though as there are generally weevils living in the bean seeds. The best way to handle them is to store your glass container of beans in the freezer.  In rural areas, seed keepers often leave their seeds in the sun for a few days to dry out. This does reduce the lifespan though.   While we sat in a circle shelling Dutch Black Beans, Neliswa remembered spending time in the fields with her grandfather planting the Three Sisters – a practice she still follows today in her small township garden. “I put one bean, one mealie and one pumpkin seed in the same hole. the bean climbs up the tall mealie stalk and the pumpkin covers the ground underneath.”

We explored Eidin’s Edge Farm garden, admiring the chia, the bright zinnias, the rows of sprouting giant pink garlic, enthusiastic broad beans, the enormous aubergines and, of course, the pumpkins beneath the maize. 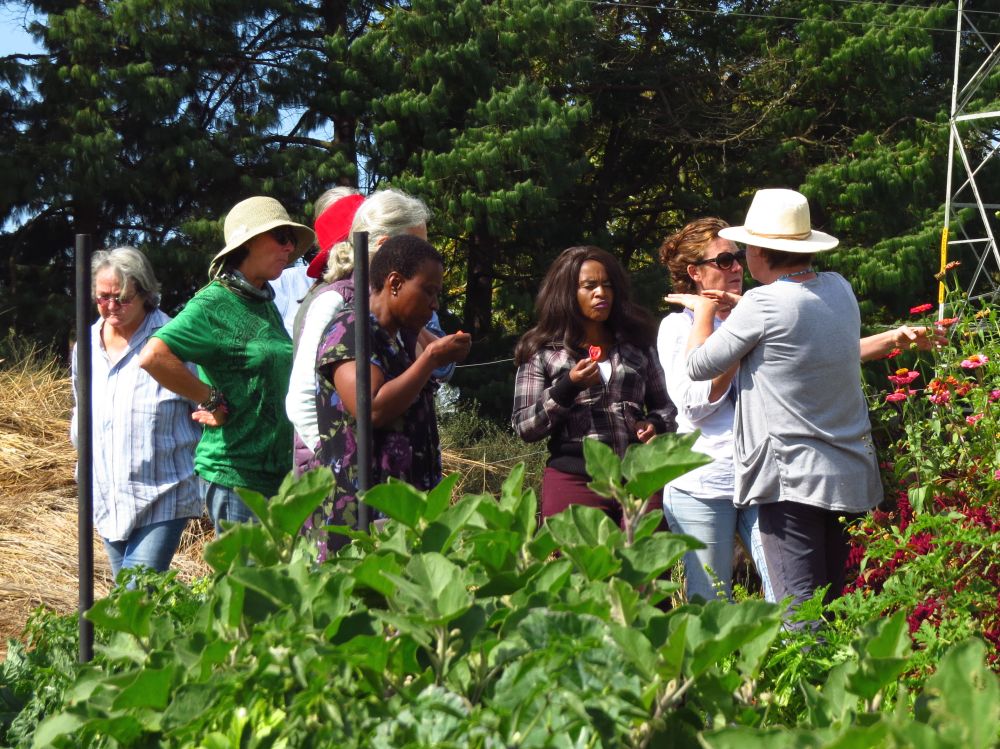 Discussion turned to saving different types of seeds.  Beans are simple. Squash need to be cracked open when the stalk is dry.  Only save the seeds that are plump. Rinse them to remove the slimy coating and lay out to dry for a few days before storing. Remember to write the date and name of the seed on the glass jar or paper bag! 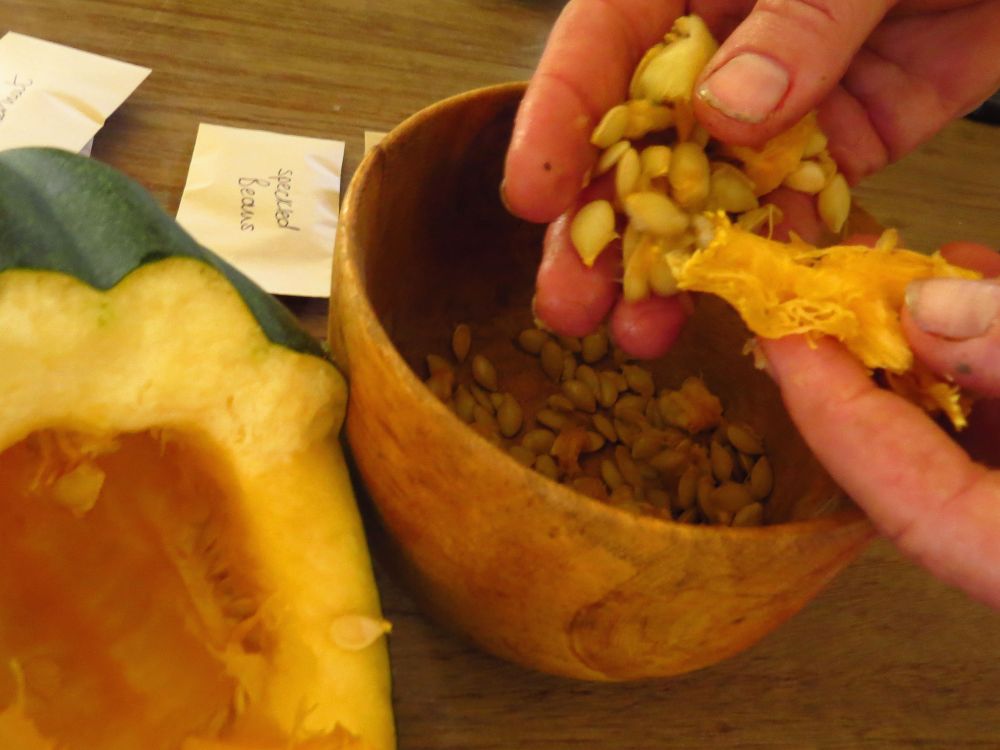 Tomatoes need fermenting. Squish very ripe fruit into some water and leave until a scum forms.  Discard any seeds that float to the top.  Dry the others and save.   Leafy greens often cross pollinate – eg beetroot and spinach, so if you plan to save seed, don’t plant them too near to one another.  Onion and lettuce seed is easiest collected by tying a paper bag over the seed head to collect them as they dry.

To end the morning, we all whipped out our stash of seeds and swopped them with new found friends (and activists).  Erica had beautiful broad beans and giant sunflowers, Lindiwe brought Mpophomeni grown carrots, spinach and spring onions, Nikki shared beans with red scribbles and dainty mauve ones too, Nicky had dahlias, Jack o’Lantern pumpkins and bom bom beans.  Such an incredible variety already! 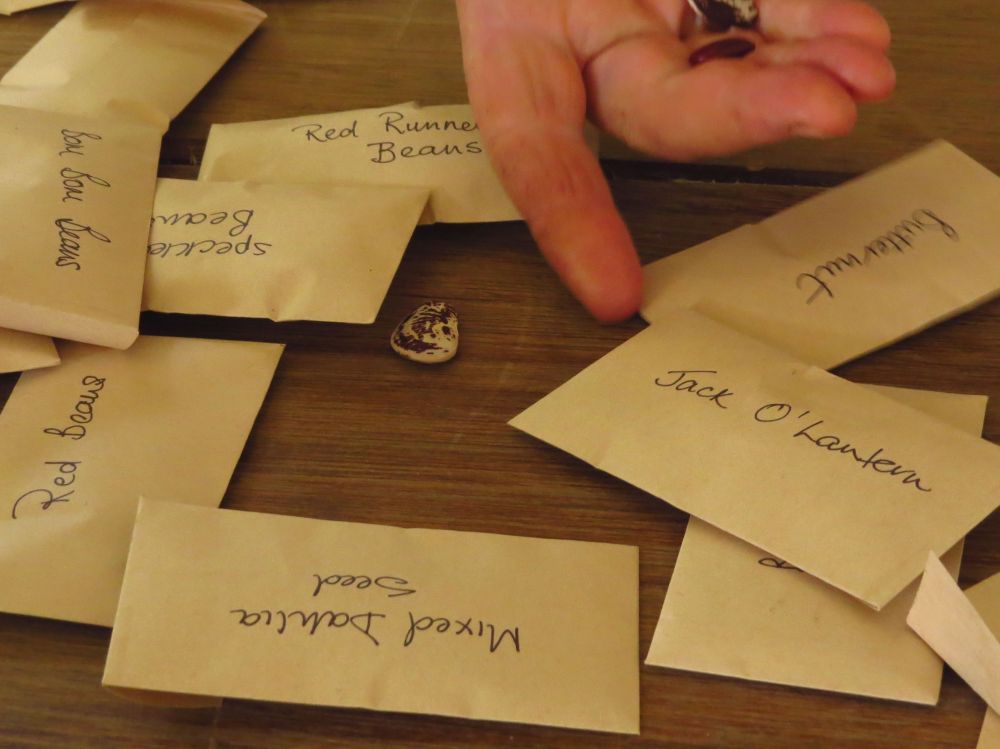 As we left, Neliswa declared she was looking forward to hearing the uPhezukomkhono bird call in August (Springtime). “It’s name means ‘go and take your hoe’.” she explained. “Oh, the Red Chested Cuckoo” laughed Nikki, “yes, the call sounds like ‘lift your hoe’!”

It is certainly time to start a seed library in our area.

It could be simple. The Midlands Barter Markets have already begun swopping seed.   Are you keen to participate? Let Eidin know what seed varieties you save and have to share and how you could contribute. thehedgeshedkzn@gmail.com

More tips on how to be a Seed Super Hero here.