Sometimes people are born on the wrong continent. Ann Burke was. Her mom, Joann realised this early on. “Her favourite puzzle was of warthogs in a muddy water hole” Joann remembers fondly. “I thought it was an ugly picture but she loved it. When she was just four years old, she told me that she was going to live in Africa. Most kids wouldn’t even know where Africa was, but Ann was sure. ” Ann laughs “Mom believes I imprinted on this puzzle!”

Growing up in Wisconsin, USA with long, cold, dark winters is about as far as you can get from Africa. Summers were fabulous though, and Ann recalls the whole family spending them camping at Devil’s Lake State Park, surrounded by purple quartzite hills, where they hiked, cycled, explored, swam and swam some more.Nowadays, Ann Burke lives in Nottingham Road (she grumbles when the cold wind blows off the ‘Berg – those long winters obviously forgotten) where she manages the KZN Crane Foundation.

Regarded as an expert in cranes and especially, hand rearing of captive birds, she is having a big impact on the conservation of cranes in the Midlands. Her mentor and friend, co-founder of the International Crane Foundation (ICF) and a leading authority on cranes, George Archibald says “In 1993 when she experienced the magnificent Blue, Crowned and Wattled Cranes on a visit to South Africa for the first time, her destiny was sealed. Ann’s combination of intelligence, high energy and motivation is now completely focussed to help these special birds in KwaZulu-Natal.”

Ann worked with George for many years at the ICF which was located in her home town of Baraboo, Wisconsin, beginning as an intern in 1987. “A friend had worked there and told me of the South Africans she had met, so I thought it would be great way to meet some too!” The South Africans were followed by Nepalese, Argentinian and Chinese – people from across the globe. Ann was fascinated by the fact that the 15 Crane species generated so much goodwill and were a symbol which galvanised action across international borders. “I was truly inspired by community conservation efforts which helped the birds and people at the same time. Often the focus was on provision of fresh water and sustainable livelihoods. It was my window to the world and of course, I fell madly in love with Cranes.”

In 1989, the ICF received half the captive flock of the very rare Whooping Cranes – with strict instructions to get them breeding. In 1945, only 21 Whooping Cranes remained in North America and through the efforts of the ICF, they now number 600. “I was the happiest woman on the planet – it was the best job I could ever have.” It took seven years of dedication before they bred successfully. George and Ann spent hundreds of hours with the birds, focussing on pairing “What many people don’t know is that cranes pair for life – but not just with anyone – they have to have a real bond with another bird. A love-match, really.” Together they helped establish several techniques to rear cranes in human care, such as having human handlers wear crane costumes to avoid human imprinting. Ann adored being a ‘chick mom’ and was particularly good at it, learning all the time and becoming an expert in hand rearing.. Ann’s grandmother kept a flock of Australop chickens on a small mixed farm in Iowa during the Great Depression and was often able to offer advice from her vast experience. “I would talk to her for hours about various aspects of breeding and hatching. Once we had a plague of lice and she told me: “Honey, go out and get tobacco leaves and put them in the nest” The lice were gone the next day, it is a great natural insecticide!”

No doubt the hours Ann spent in her company pouring over pictures in National Geographic and listening to stories of wild birds were a big influence in Ann’s life. Grandma would surely be proud that Ann is author of the chapter on Wattled Cranes in the ICUN publication, The Crane: Status, Survey and Conservation Action Plan used around the world.

Ann has grabbed opportunities to spend time in Africa and after an 18 month stint helping the SA Crane Working Group with research on how to manage a release programme (once you’ve got the breeding done, there is no point keeping the birds in captivity), she knew she had to find a way to come back. “I burst into tears as the plane taxied down the runway. I felt real grief.” Ann felt that she just didn’t fit in in the States anymore. Her values and priorities were different. 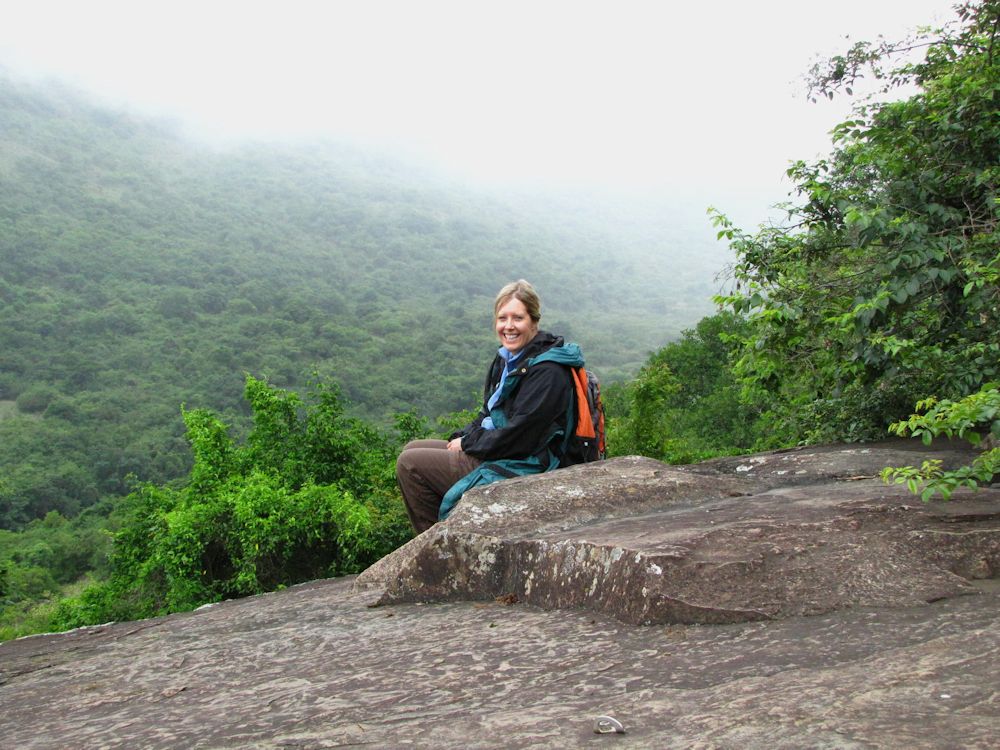 As luck would have it, an offer arrived to assist with the Wattled Crane captive rearing programme in 2010 (there are only 260 critically endangered Wattled Cranes left in the wild). “The probability of everything working out was beyond my comprehension”, she says. Ann packed two suitcases and started her new life as a volunteer at the KZN Crane Foundation – a non-profit conservation organisation established in 1989 to combat the causes leading to the decline of South Africa’s three crane species.

She has been instrumental in fundraising to build the isolation-rearing facility at the new Wattled Crane Nursery on the Bill Barnes Crane and Oribi Reserve, where the KZN Crane Foundation is headquatered. “I am terribly excited about the architecturally designed ‘green’ nursery, built with sustainable principles,” comments KZNCF Board member Jon Bates, adding “Ann is an absolute a delight to work with. Her enthusiasm is boundless and she has influenced our entire community to ‘think crane’.” South African, David Oosthuizen, illustrator of ‘The Wisdom of Cranes’ (a book celebrating the special ethos of cranes) says “I am embarrassed to say that it took a de-tribalised American to teach me about these incredible birds right on our doorstep.”

Ann is well known in the Midlands community now. Recently, she set up an education outreach in local schools believing that education is vital if the captive breeding and release programme is to work. The programme highlights the importance of protecting the Midlands fresh water resource by teaching about the habitats which are necessary for the cranes survival – wetlands and grasslands. “The crane’s reliance on wetlands is a reflection of our own survival. The human need for clean water cuts across race, gender, age and religious affiliation and connects us to all living things. Cranes embody values of faithfulness and courage which are important across human cultures. ” Ann concludes, “We can learn so much from cranes.”
South African cranes have the most astonishing ally in Ann Burke. 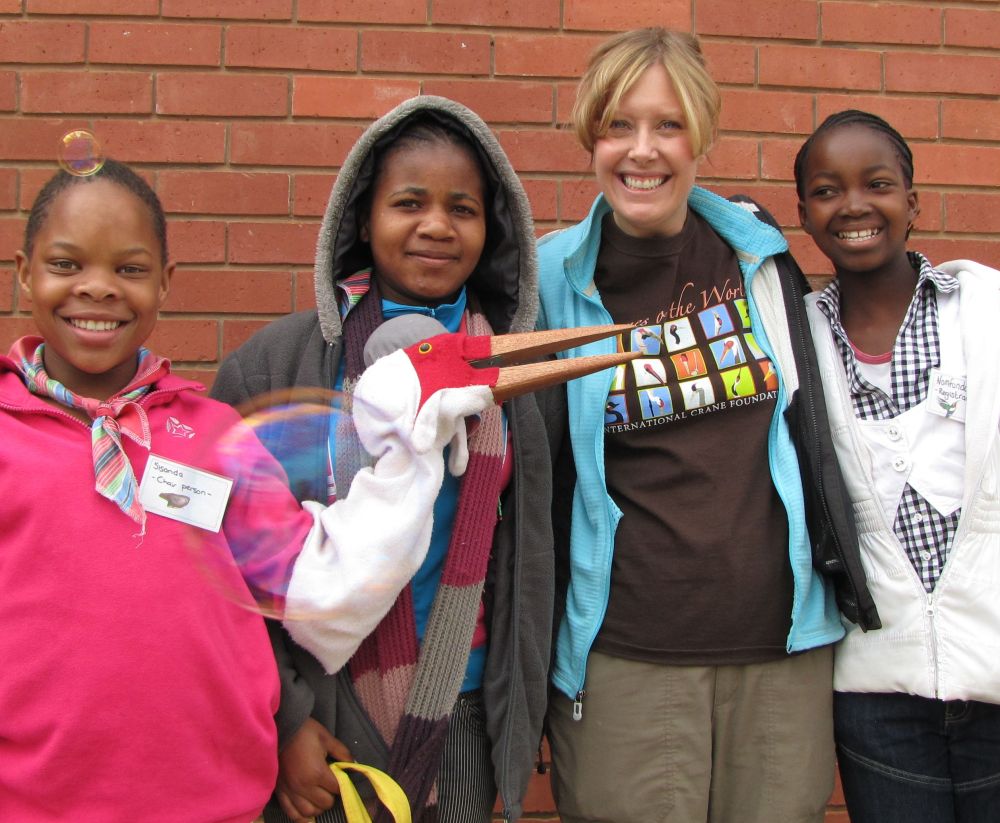